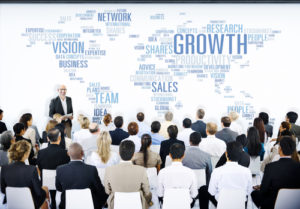 At a recent Around the Horn session, we fielded a question from a gentleman who was a successful franchisee of a fast-growing business that had a strong sales component. He and his management team created a leadership structure, new mission statement, and are now considering an adjustment to their compensation plan to make it “salary plus.” That means providing a higher base salary while reducing commissions at the same time.

Having worked in sales environments for years, I felt compelled to offer my own two cents.

There are a series of tradeoffs whenever a company chooses between salary and commission. Top performers are often comfortable with higher commission and lower salaries. Poor performers and slow starters prefer higher base salaries accompanied by lower commission rates.

A company’s initiative to foster a team atmosphere can reach out to the sales reps alone, in small teams, or as a team made up of the entire sales force.

Making teams out of all the sales reps is often a good choice because it enables all to prosper during times when the gross margin is higher, without hindering an atmosphere of competition. They will still manage to compete with each other, but not usually in a hostile way. As one attendee put it, people won’t try to steal other teammates’ business because they will be rooting for their peers as well as themselves.

Striking the right balance between commission and salary is not easy. This is where networking comes into play: by learning from other businesses in various stages of development, one can gain a broader view that would otherwise only be attainable through trial and error.

If you would like to join our next Around the Horn session to offer advice, or to receive it, contact me here.

Hiring: Give It the Attention You DeserveSarver, Eric
Scroll to top